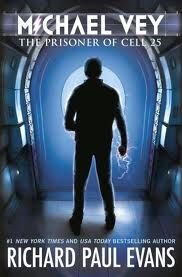 Michael Vey: The Prisoner of Cell 25 is the first book in the Michael Vey series written by Richard Paul Evans.

Michael is introduced to us as a fourteen year-old boy with Tourettes Syndrome.  He has been bullied and ignored his entire life, but that all changes when he uses his unique(or so he thinks) electrical powers to stand up to the school bullies, Jack, Wade, and Mitchell. But this also catches the attention of the Elgen coporation, who gave Michael his powers, along with sixteen other youthes, at birth. The elgen kidnap Michael's mother, Sharon Vey, and his crush and fellow electric, Taylor, as 'insurance'. Michael gets Jack and Wade to drive him and his friend Ostin to the Elgen Academy in Pasadena, California.

Meanwhile Taylor Ridley, another 'glow' and a friend of Michael's who had also been taken by the Elgen, is being shipped forcibly to The Academy by Nichelle and two elgen guards. Upon arrival she goes through a routine physical examination, and is then sent to a cell. Shortly after, she meets the seemingly friendly Dr. C. James Hatch, along with her long lost identical twin sister, Tara. She is then moved to an Academy Suite, and showered with expensive gifts. She meets the rest of the Elgen Academy resident glows, Quentin, Kylee, Bryan, Grace, and Zeus. However, Taylor soon finds out that everything at The Academy is not what it seems, and the dream of the enchanting gourmet meals and diamond jewlery soon turns into a horrific, torturous nightmare.

Retrieved from "https://michaelvey.fandom.com/wiki/The_Prisoner_of_Cell_25?oldid=4971"
Community content is available under CC-BY-SA unless otherwise noted.